Dressed in white overalls to protect her from bee stings, Stella Mutai and her colleagues move from one beehive to another, searching for sweet bounty.

They do this every day, navigating through the treacherous terrain at Kiptobit village in Bomet East to reach the site of their beehives.

The journey is tiresome and risky, but it has to be done every three months.

“You have to keep checking. If you don’t, the bees will start feeding on the honey,” says Ms Mutai.

She and 26 other members of the anaan Women Group started the beekeeping venture in 2004. Mutai chairs the group and describes the 16-year journey as a blessing.

“We were not sure at the beginning, but we have never looked back,” she says.

“We kept thinking: bees can sting, and how are we going to find a market for the honey? But after the first harvest, we realised it was easy,”  she says.

Alice Maridany, one of members, says the idea came after a farmers’ training by the Ministry of Agriculture in their village in 2003.

“After the training, we were offered a one-week tour of Baraka Agricultural College in Nakuru. One of the things that captured our attention was beekeeping,” she says.

Compared to other types of farming that the visiting team was introduced to, bees were the least labour-intensive, and cheap to keep.

“After the tour, we tabled all ideas picked from the tour and voted on which one was the best. Some proposed poultry and dairy farming but after the vote, bees carried the day and we immediately started preparations,” Ms Maridany told Smart Harvest.

“After researching and shopping around for best types of beehives, we made an order,” says Lilian Langat, the group’s secretary.

The group then identified four sites within members’ farms to install the hives.  Three months later, the honey was ready for harvesting.

It was a sweet surprise.

“We harvested more than 300 kilogrammes of honey from the 25 beehives,” says Ms Langat.

But the excitement of the first harvest was whittled down by one challenge: where were they going to take all this honey?

“We got overwhelmed by amount of honey we harvested, and started consuming it in our homes before we thought of hawking it in nearby towns,”  says Langat.

The women packed the honey in small quantities and sold it on the streets.

“We sold some of the honey for as little as Sh200 per kilogramme. We did not make much money,”  says Langat, but patience paid off and their prices soon increased.

“We learnt from our initial mistakes, and in subsequent harvests we managed to  sell more and make more profits.”

The rest is history, or as the group puts it, ‘herstory’. Their venture has expanded, and their brand of honey has grown in popularity.

“We put up billboards in the nearby shopping centres to advertise our honey and the demand started rising,” says Langat.

Today, a kilogramme of honey from the group’s hives fetches Sh1,000, and the harvests have grown from 300kgs to 500kgs per harvest, depending on the weather.

Production tends to dip in the rainy season.

“When it rains, bees do not go out of the beehives and honey production drops as low s five kilogrammes per hive,” says Maridany.

To mitigate this, the group has resorted to planting flowers near the beehives and is keen to scale up production.

“There is growing demand for honey, and we have to double production to meet this,” says Langat.

The biggest challenge remains processing and packaging the honey.

“We are witnessing an increase in production and must now acquire processing and packaging machines,” says Mutai.

“If all goes well, we are targeting producing more than 2,000kgs of honey from 100 beehives.”

The group is scouting for investors to partner with in packaging.

“We do not want to be overtaken by others; we need partners to help us acquire honey processing machines,” she says. 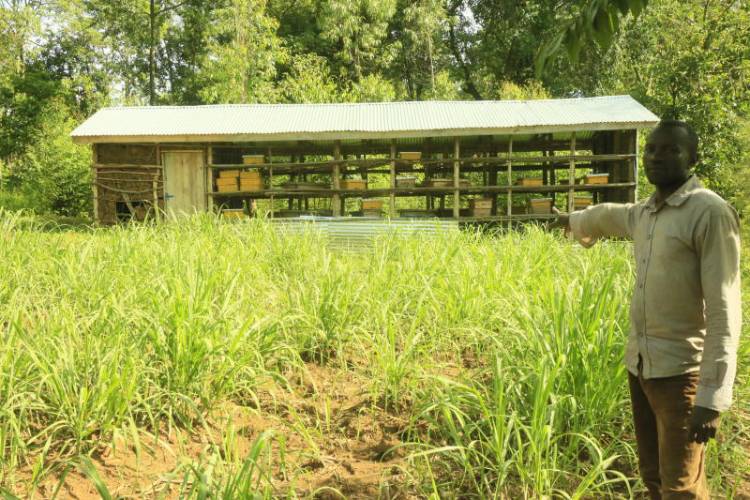